Amaro is an alcoholic beverage with a predominantly bitter taste, made with an infusion in alcohol of different botanicals and drunk for its digestive characteristics. Amaro della Sacra is an infusion in cold alcohol (called cold maceration) of flowers, roots, seeds, barks, resins and woods, then decanted and refined in stainlesssteel tanks for several months, filtered and bottled. The alcohol by volume is 35%.

In the Middle Ages, while the learned monks of monasteries and abbeys were transcribing and restoring ancient texts, they also cultivated the herbs and plants necessary for the preparation of tinctures, teas, and liqueurs. Amaro della Sacra is the result of painstaking historical research of these traditions that were in use for hundreds of years in Europe. 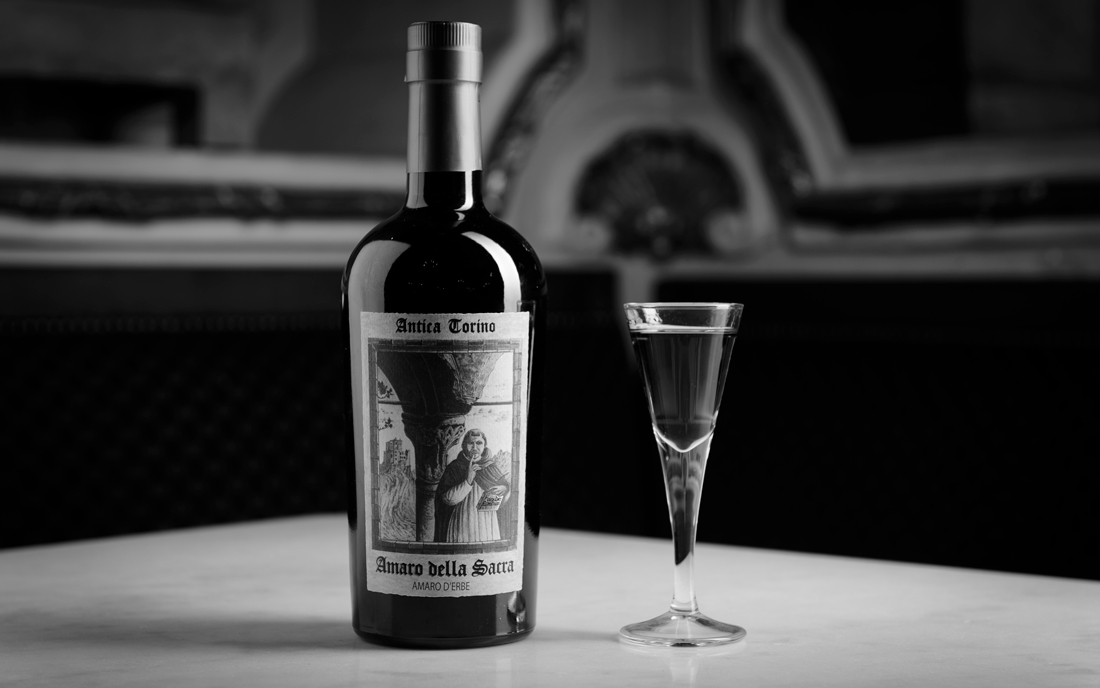 The ingredients are all natural: leaves, flowers, seeds, roots, resins, spices and barks. Some typical of the territory of Piedmont such as gentianella and hops flowers, others more ‘exotic,’ discovered over the centutires during the exploration of new lands, including the vanilla of Madagascar, the green cardamom of the Indies, the myrrh of the Middle East, as well as the chinchona bark of South America. Amaro della Sacra is created by macerating the ingredients in grain alcohol and ageing until all the elements are well incorporated. 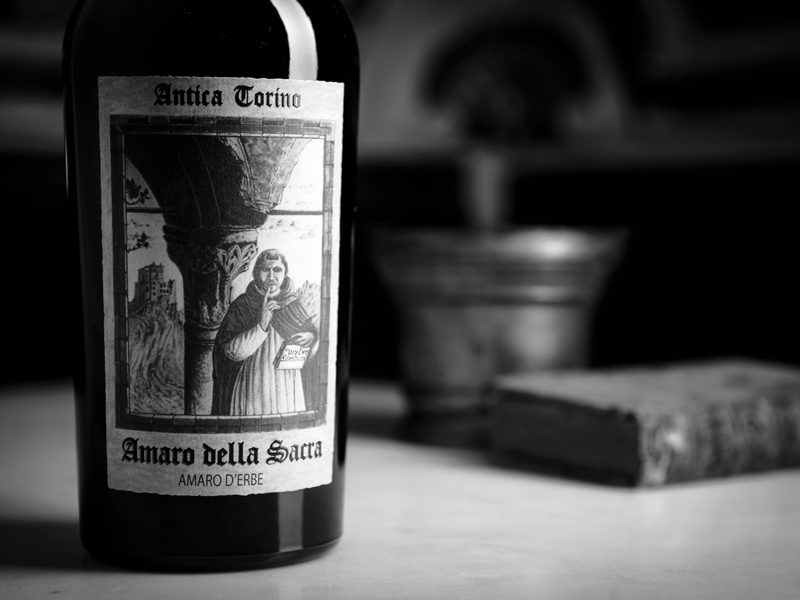 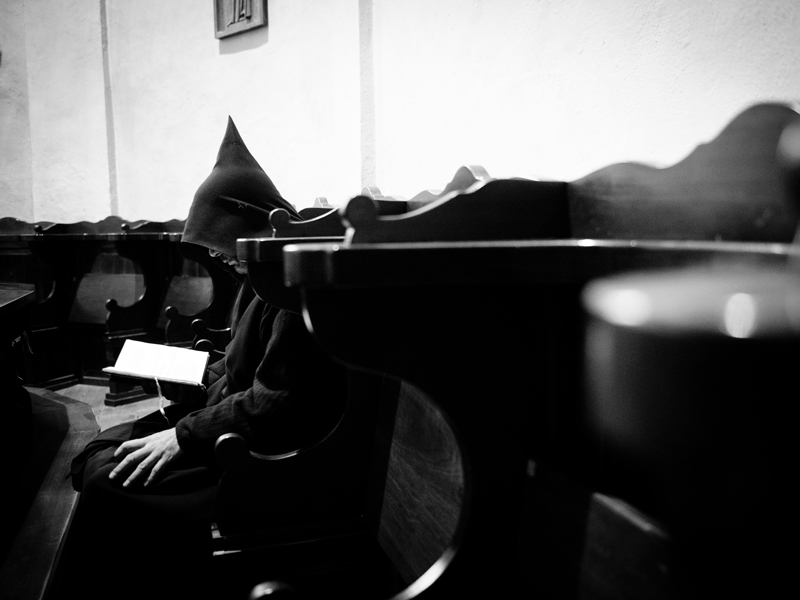 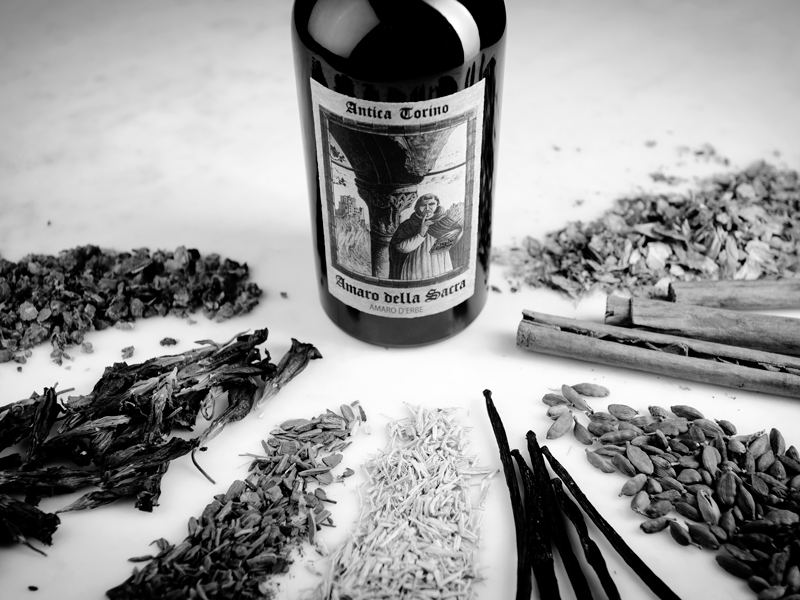 The label designed in 1925 by Francesco Carandini, an historian and poet from Piedmont, depicts a Benedictine monk intent on the study of an ancient text, entitled ‘Vox Dei Silentium’ (silence is the voice of God). In the background, is the Sacra di San Michele, an ancient landmark abbey perched on the summit of Mount Pirchiriano, near the city of Turin, in Piedmont. The Sacra di san Michele is SYMBOLIC MONUMENT of Piedmont by a 1994 regional law.

Maceration of the natural botanicals in alcohol 96,5° for 45 days, decanting, long refinement in stainless steel tank, filtering and bottling.

Warm bright brownish color, rich and consistent in the glass, spicy with hints of cinnamom, cardamom and chinchona.

Complex and wide in the palate, hot, bitter-sweet, with long finish.

Amaro della Sacra with its spicy, complex and warm notes works very well in mixology, Rye whisky, bourbon, tequila and london dry gin are its best companions. It is a very interesting and unique sub of Campari bitter.

Turin, city of the Savoy’s and Belle Epoque

This monument is a symbol of the Piedmont Region and a place that inspired the writer Umberto Eco to pen his best-seller The name of the Rose (“Il nome della rosa”). The Sacra of San Michele is an ancient abbey built between 983 and 987 on the summit of mount Pirchiriano, 40 km from Turin.

From its towers you can admire Turin and a breathtaking view of the Val di Susa. Inside the main Church of the Sacra, dating from the twelfth century, are buried members of the House of Savoy (one of the oldest royal families in the world).

Dedicated to the cult of the Archangel Michael, defender of the Christian people, the Sacra di San Michele lies on a pilgrim route (over 2000 km long) running from Saint-Michel (France) to Monte Sant’Angelo (Puglia).

Its history, spiritual value and the landscape that surrounds it make the Sacra a special destination for visitors from all over Europe: pilgrims, believers, tourists but also athletes who want to test themselves by biking up the mountain.